The Elites Attack On Free Speech

Peter starts up this week’s episode provocatively: “Just shut up!”

Censorship seems to be all around us, from the Hunter Biden laptop story to the possibility of fraud during the 2020 election. People are silenced for objecting to trans athletes in women’s school sports.

It’s important to define what censorship is and what it isn’t. It isn’t disagreeing with someone. It is blocking someone’s ability to speak.

The late Village Voice writer Nat Hentoff was a left-winger on many issues, but he was such a stout defender of free speech that he argued against stopping a rally of American Nazis in Skokie, Illinois in the 1970s. For those too young to remember, Skokie at that time had a very high population of Jewish Holocaust survivors who had immigrated to the US after the war.

Hentoff’s attitude might be summed up by a line Eric recalls from an Aaron Sorkin movie called “The American President.” Playing the president, actor Michael Douglas tells a crowd: 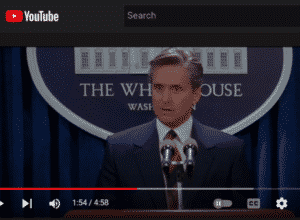 Let’s see you acknowledge a man whose words make your blood boil, who’s standing center-stage and advocating at the top of his lungs that which you would spend a lifetime opposing at the top of yours.”

Censorship denies this truth, and the censors use it as a weapon to make sure only their opinion is heard, and contrary opinions will just get you in trouble. At bottom, it is the belief that people are too stupid to sift ideas for themselves.

The Hunter Biden laptop story was censored as false and as “Russian disinformation” by social media platforms and major news outlets during the 2020 election campaign. Almost two years later, the New York Times and the Washington Post have both recently reported on it and acknowledged that it is true and was not disinformation.

Ginni Thomas is the wife of Supreme Court Associate Justice Clarence Thomas. A longtime conservative movement activist, she was outspoken about 2020 election, and text messages between her and then White House chief of staff Mark Meadows urging him to stand firm for election integrity came to light during the congressional investigation into the Jan. 6 riot. The push to censor her is now a cudgel to attack her husband, Justice Thomas, arguing he must recuse himself should the Court hear cases relating to the riot.

The conditions under which the 2020 election was conducted were unique, because of the pandemic. But there really is evidence that fraudulent, illegal activity took place in some states in the distribution and collection of ballots. A vote integrity study released just this week asserts that, “At least 137,500 absentee ballots were cast through unlawful vote trafficking throughout several of Wisconsin’s largest cities in the 2020 election.” Whether that study or that conclusion is accurate is open to question, but the press in Wisconsin and nationally have refused even to report on the study, which analyzed cellphone tracking data to map paid ballot harvesters making repeated trips to ballot collection boxes in at least six states.

Eric wrote a book in 2018 about historic fraud in American elections, and we have interviewed Mollie Hemingway who wrote a book about the irregularities in the 2020 election. Both books discussed “ballot harvesting” and Mollie’s also addressed how ballot collection boxes were carefully sited during the 2020 election cycle.

These facts raise valid questions that should not be shut down just because of the Jan. 6 riot at the Capitol. But, as Peter notes, “the Claremont Institute’s American Mind podcast on election fraud was actually removed from social media because they dared to raise these questions.”