Where the Teachers Unions Send Their Money

Grades are in for the nation’s schools and the effect of the closing of public schools during the COVID-19 pandemic is glaring.

The report comes from the National Center for Education Statistics and is known as “The Nation’s Report Card.” It has long been used as a measure of educational progress in the United States. The New York Times reported recently that the “pandemic erased two decades of progress in math and reading.” 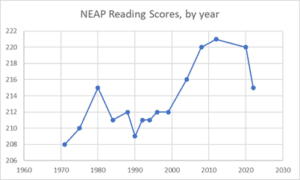 In reading, scores declined from 220 to 215. In mathematics, scores declined from 241 to 234. There are three undeniable factors behind this drop. The school closures; so-called “hybrid” learning; and a shift in focus by the public-school teachers unions from education to politics. Each of these factors has contributed to a plummet in the reading and math proficiency of American public-school children.

On the latest episode of The Drill Down podcast, co-hosts Peter Schweizer and Eric Eggers discuss a new report by the Government Accountability Institute (GAI) that looks at the dramatic politicization of the nation’s two biggest teachers unions. GAI researchers examined the spending forms the two unions file reach year detailing their spending activities. The findings are startling.

GAI observed that last year, the National Education Association (NEA) and the American Federation of Teachers (AFT) collected approximately $575 million in dues from their members. How, we asked, did they spend these funds? 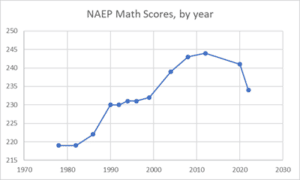 Because of pressure from teachers unions, children were kept out of schools during the pandemic, and Americans have noticed how union leaders have chosen to take very public positions on divisive issues.

GAI president and investigative journalist Peter Schweizer commented on the report’s findings: “Unfortunately, this research confirms that America’s national teachers unions are more interested in advancing a radical political agenda than in actually representing their members.”

Teachers unions have always had a political element, of course. What may shock many Americans and even union members, however, is the diversion of spending priorities imposed by top union officials over the last fifteen years related to tens of millions of dollars in funds collected from America’s teachers.

Surveys show that the approximately 57 percent of teachers call themselves Republicans or independents, yet almost 100 percent of the union spending supports Democrat and progressive candidates and policy positions.

Highlights from the report: